Female Siamese fighting fish or female bettas are not as sought after as their male counterparts; they just aren’t as pretty. Female betta colors are not as deep or vibrant, which is the main reason that most pet owners buy bettas.

However, the best part of female bettas is that they are generally raised in communal betta fish tanks with other female betta fish. They are used to communal living and won’t tear each other apart like two male bettas will do. You can have several female Siamese fighting fish without having to put them in divided tanks, also, if you look around, you can buy female bettas that are just as beautiful as male fighting fish.

Female bettas are used to communal living, but that’s not to say that they don’t sort things out a little when they get into a tank together. While they won’t tear each others’ tails and fins off the way the boys do, they do develop a pecking order. Within a short time and after a few shoves, they’ll determine who the alpha female is and there will be peace in the betta tank.

Keep in mind that there will always be one dominant female and one at the bottom of the totem pole. The more females you have in the tank, the less abuse the female betta at the end of the pecking order will have to endure. We suggest having five or more female Siamese fighting fish in your tank.

If you intend to breed betta fish then you definitely will be in the market to buy female bettas. We carry a large supply of robust and beautiful female Siamese fighting fish that are ready for breeding. If you have several female bettas, you can also check which one your male betta is happiest about breeding with. Place a female either in his tank for a few minutes, or preferably in a divided tank beside him. You will notice that he’ll build a betta bubblenest more frantically for one of the females than for the others.

Return to the top of Female Siamese Fighting Fish

Baby betta fish need to eat microscopic organisms that are found in pond water. To produce your own betta pond water, add organic material to a shallow dish of water. Leave it in direct sunlight for a couple days. You can now harvest water from your “pond” and add it to your betta tank. Read more about how to breed betta fish.

Your Source for Female Bettas

Thanks!! We now have Betta fish babies! 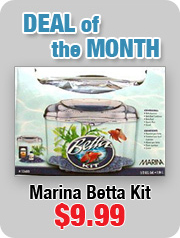